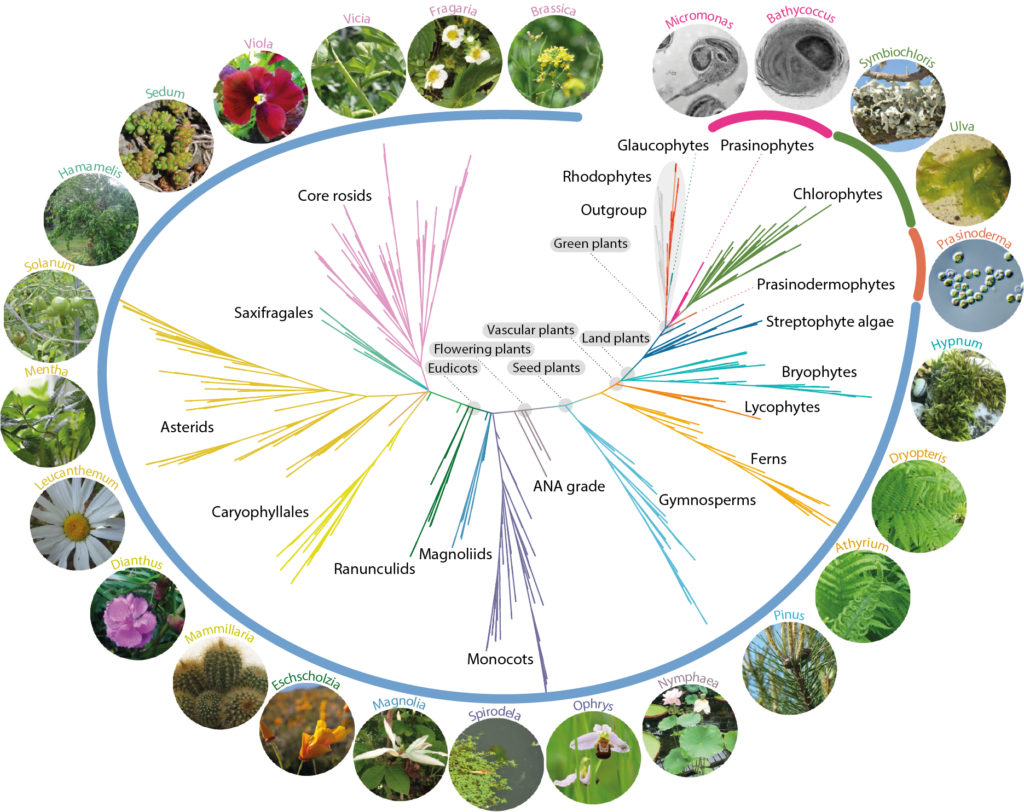 The colonization of land by plants generated opportunities for the rise of new heterotrophic life forms, including humankind. A unique event underpinned this massive change to earth ecosystems-the advent of eukaryotic green algae. Today, an abundant marine green algal group, the prasinophytes, alongside prasinodermophytes and nonmarine chlorophyte algae, is facilitating insights into plant developments. Genome-level data allow identification of conserved proteins and protein families with extensive modifications, losses, or gains and expansion patterns that connect to niche specialization and diversification. Here, we contextualize attributes according to Viridiplantae evolutionary relationships, starting with orthologous protein families, and then focusing on key elements with marked differentiation, resulting in patchy distributions across green algae and plants. We place attention on peptidoglycan biosynthesis, important for plastid division and walls; phytochrome photosensors that are master regulators in plants; and carbohydrate-active enzymes, essential to all manner of carbohydratebiotransformations. Together with advances in algal model systems, these areas are ripe for discovering molecular roles and innovations within and across plant and algal lineages.

Critical questions exist regarding the abundance and, especially, the export of picophytoplankton (≤2 µm diameter) in the Arctic. These organisms can dominate chlorophyll concentrations in Arctic regions, which are subject to rapid change. The picoeukaryotic prasinophyte Micromonas grows in polar environments and appears to constitute a large, but variable, proportion of the phytoplankton in these waters. Here, we analyze 81 samples from the upper 100 m of the water column from the Fram Strait collected over multiple years (2009–2015). We also analyze sediment trap samples to examine picophytoplankton contributions to export, using both 18S rRNA gene qPCR and V1-V2 16S rRNA Illumina amplicon sequencing to assess the Micromonas abundance within the broader diversity of photosynthetic eukaryotes based on the phylogenetic placement of plastid-derived 16S amplicons. The material sequenced from the sediment traps in July and September 2010 showed that 11.2 ± 12.4% of plastid-derived amplicons are from picoplanktonic prasinophyte algae and other green lineage (Viridiplantae) members. In the traps, Micromonas dominated (83.6% ± 21.3%) in terms of the overall relative abundance of Viridiplantae amplicons, specifically the species Micromonas polaris. Temporal variations in Micromonas abundances quantified by qPCR were also observed, with higher abundances in the late-July traps and deeper traps. In the photic zone samples, four prasinophyte classes were detected in the amplicon data, with Micromonas again being the dominant prasinophyte, based on the relative abundance (89.4% ± 8.0%), but with two species (M. polaris and M. commoda-like) present. The quantitative PCR assessments showed that the photic zone samples with higher Micromonasabundances (>1000 gene copies per mL) had significantly lower standing stocks of phosphate and nitrate, and a shallower average depth (20 m) than those with fewer Micromonas. This study shows that despite their size, prasinophyte picophytoplankton are exported to the deep sea, and that Micromonas is particularly important within this size fraction in Arctic marine ecosystems.

I am a marine microbiologist, studying unicellular eukaryotes (protists) from a molecular perspective to understand their diversity, ecology and evolutionary history.
I like combining old-fashioned and really modern approaches to study these lovely, yet poorly-loved wonders of our oceans.