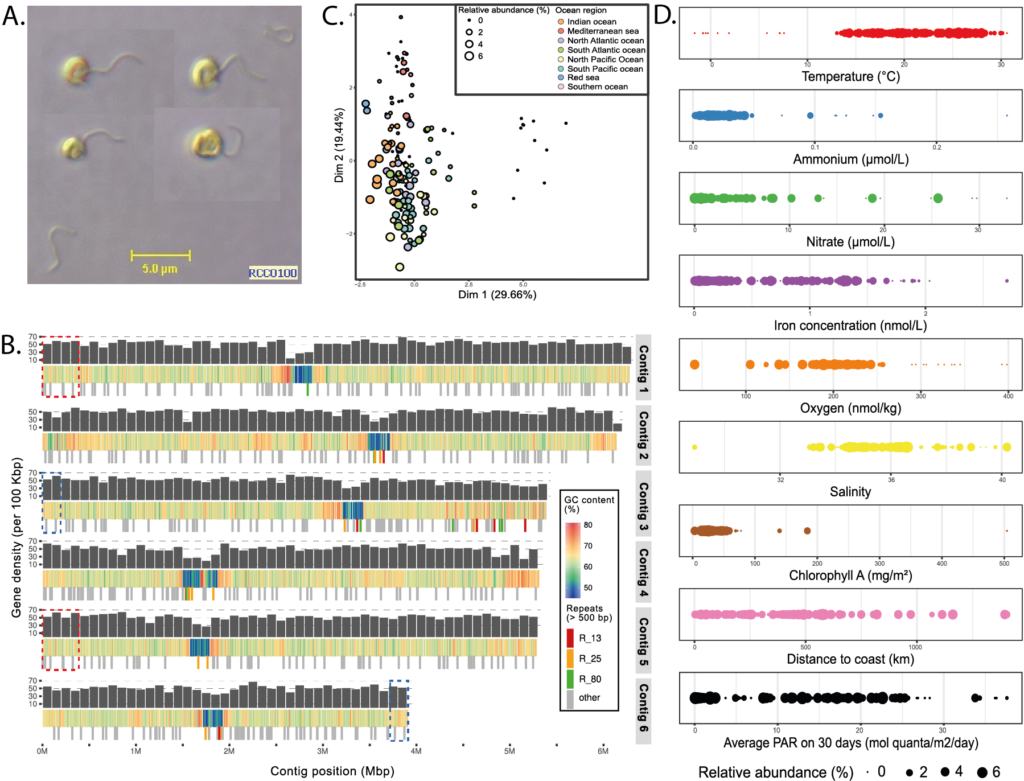 The smallest phytoplankton species are key actors in oceans biogeochemical cycling and their abundance and distribution are affected with global environmental changes. Among them, algae of the Pelagophyceae class encompass coastal species causative of harmful algal blooms while others are cosmopolitan and abundant. The lack of genomic reference in this lineage is a main limitation to study its ecological importance. Here, we analysed Pelagomonas calceolata relative abundance, ecological niche and potential for the adaptation in all oceans using a complete chromosome-scale assembled genome sequence. Our results show that P. calceolata is one of the most abundant eukaryotic species in the oceans with a relative abundance favoured by high temperature, low-light and iron-poor conditions. Climate change projections based on its relative abundance suggest an extension of the P. calceolata habitat toward the poles at the end of this century. Finally, we observed a specific gene repertoire and expression level variations potentially explaining its ecological success in low-iron and low-nitrate environments. Collectively, these findings reveal the ecological importance of P. calceolata and lay the foundation for a global scale analysis of the adaptation and acclimation strategies of this small phytoplankton in a changing environment.

Microbial predators such as choanoflagellates are key players in ocean food webs. Choanoflagellates, which are the closest unicellular relatives of animals, consume bacteria and also exhibit marked biological transitions triggered by bacterial compounds, yet their native microbiomes remain uncharacterized. Here we report the discovery of a ubiquitous, uncultured bacterial lineage we name CandidatusComchoanobacterales ord. nov., related to the human pathogen Coxiella and physically associated with the uncultured marine choanoflagellate Bicosta minor. We analyse complete ‘Comchoano’ genomes acquired after sorting single Bicosta cells, finding signatures of obligate host-dependence, including reduction of pathways encoding glycolysis, membrane components, amino acids and B-vitamins. Comchoano encode the necessary apparatus to import energy and other compounds from the host, proteins for host-cell associations and a type IV secretion system closest to Coxiella’sthat is expressed in Pacific Ocean metatranscriptomes. Interactions between choanoflagellates and their microbiota could reshape the direction of energy and resource flow attributed to microbial predators, adding complexity and nuance to marine food webs.

I am a marine microbiologist, studying unicellular eukaryotes (protists) from a molecular perspective to understand their diversity, ecology and evolutionary history.
I like combining old-fashioned and really modern approaches to study these lovely, yet poorly-loved wonders of our oceans.